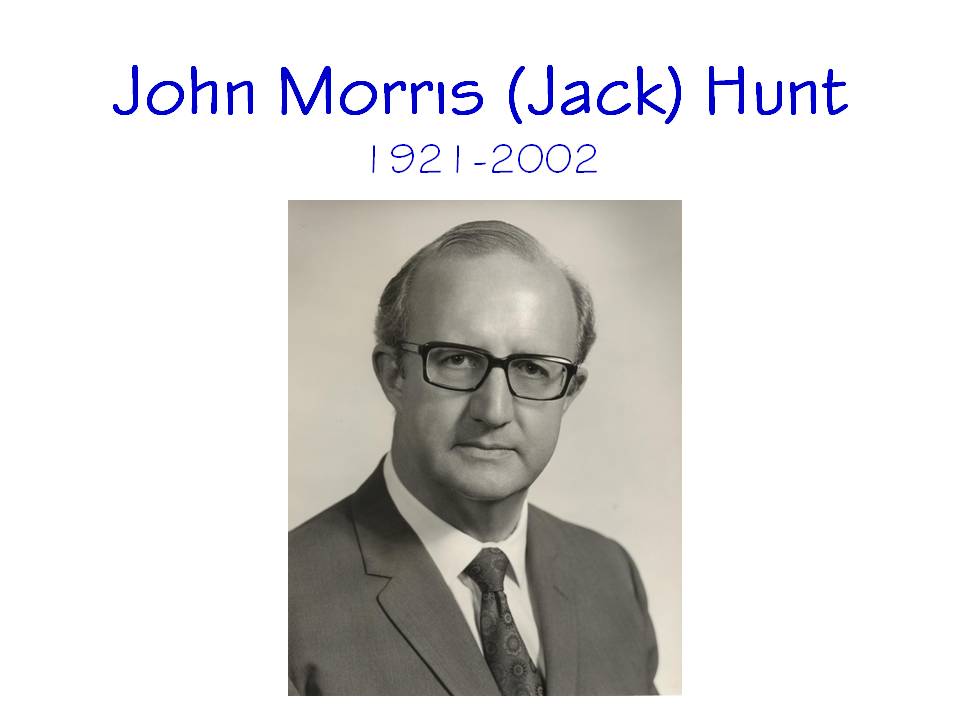 It’s the nature of memory that you remember the last things first.

My first memories of Dad are the recent ones. As the effects of age and Parkinson’s disease slowed him up and bent him down. Of his successful struggle to bring himself up to share Mum’s memorial service with all of us four months ago.

Some of the younger members of the family will only remember their grandfather like that. As this frail, bent old man. Yet, if we push through these last memories, we recall this enormously capable, organised, caring and cultured man.

Somewhere in the recesses of my memory I recall Mum and Dad’s mention of the name Mr Death, a man who had known Dad since childhood and who had known Dad’s parents for many years before that.

Mr Death gave Dad a personal reference in 1947 which said in part “He is a man of unbounded energy and initiative and is a born organiser and planner.” Well, Mr Death was a good judge of persons, for this is one of the ways I recall my father.

Everything about Dad was organised.

His CDs were in alphabetical order. His hundreds of Kodachrome slides all stored in labelled and dated carousels ready to show. His dozens of photo albums in date order. He took photos of the grandchildren with them lined up in order of age, and then in order of height. He carried a notebook to order his daily tasks. He put family mementos in ordered boxes, and then card-indexed all the boxes, and then indexed the card indexes. He had a dymo machine and anything that looked like it might be a series, got a dymo label. Indeed, had dymo machines been invented when I was born I fancy I might have been labelled “Child 2.”

My favourite memories are from the Granville Methodist Sunday School. Dad was the Sunday School Superintendent. The Sunday School bought a bus and Dad and others drove it around the suburb picking up and delivering the children.

In those days before CDs and even before LP records, the old 78s were quite brittle so Dad instituted a record breaking ceremony. Whenever attendance reached a new high, some lucky child was given the hammer and we smashed the record. Literally.

Out the front of the church was a big notice board advertising the services. It was hand-painted afresh every week by my father with perfect sign-writing.

Sunday School anniversaries were organised with a respect for production values so high that when I began to work in the media I discovered I was expected to lower my standards. The production standards in the Sunday School were higher than in commercial radio! Sunday School anniversaries were extravaganzas. Choir platforms built to dizzying heights, covered in white linen. A whole raft of new songs learned. All in perfect four-part harmony. My Dad out in front directing the way with a conductor’s baton (not to forget My Mum and Uncle Neil on piano and organ much of the time).

As a young teenager I discovered my Dad at work. He would take me into the city on Saturday mornings and while he worked I would play with the adding machines, or wander the city taking pretend photographs because I couldn’t afford film for my Kodak.

Sometimes Dad would preach in church and I discovered he had a poetic side. He would quote poems to emphasise something, but the effect on me was more the surprise at seeing this side of his private character. I experienced my father as a leader, organiser, the steadily ticking clock in the middle of life’s storms. It was fascinating to me to realise that there also was a soft and poetic side to him.

Later he took me to the Youth Concerts put on by the Queensland Symphony Orchestra. I know he enjoyed these much more than I did. He knew about Beethoven and Mozart and had a large collection of LPs collected from the World Record Club and listened to often.

Dad expressed his love for his children in acts of generosity rather than public displays of emotion. When we moved to Queensland he was the father of three teenagers and he allowed us to select furniture and colour schemes for our bedrooms. And, in my case, he then proceeded to make all the furniture himself. He was a superb cabinet maker. Every door fitted millimetre perfect. Every drawer sliding as if mounted on grease. He was an engineer by training, of course, so maybe he did grease the drawers.

Once we were married and setting up our own homes and families he continued to be generous. He gave me and Judy our first car when we got engaged. And he didn’t complain when I was stupid enough to sell it for something that I then smashed up. He paid for things around the house and he would genuinely have been confused if we felt any obligation as a result. I am sure he would have said that the only obligation we had to him was to be good and caring parents ourselves.

Of course, there are many more memories. He could be stern, but he was never unfair. He was a good teacher but he was impatient with carelessness. He had a firm view of what was right and wrong, but he gave us freedom to be different from him. He had enormous confidence and self-assurance, but he balanced this with politeness and an appreciation of etiquette. Dad was a gentleman.

Dad’s mother was Nellie Pegler. Mum would say of Dad that he was a real Pegler, “they are sometimes wrong, but never in doubt.” And yet, we knew that alongside his self-confidence was a questioning capacity; an interest in learning. He read widely. He searched for answers. He was interested in the world. When Judy (my wife Judy) remembers Dad one of the things that sticks out is his daily habit of listening to AM in the car on the way to work. “It was either AM or classical music,” is what Judy recalls.

Of course, my favourite memories of Dad are the earliest ones. I remember sitting beside him in the pew at Granville Methodist Church and trying to prise open the fingers on his big strong grown-up hand. I would grunt and groan to lift even one finger from his clenched fist and then he would just let me push up one finger, and then another until “hurrah” his whole hand was open and he would spring it shut trapping my child’s hand completely inside. And the whole game would start over. Many second-rate sermons were endured by both of us in this manner.

Dad cared about doing things properly and he would not like this occasion to be any different. There are people to be thanked. Dad owes a special debt in these last few years to my sisters, Judith and Ann and their husbands, Don and Renzo. Ann took on the burden of looking after his personal affairs and Judith helped with many of his needs. His last few years were made bearable and pleasant also by the care of the staff at Brentwood Village. We know that both he and Mum were well cared for, they were appreciated, and they were happy. Also we want to recognise the friendship and support of Gwen during this time. Gwen became part of the family and we love her. Finally we want to thank Ken Day, the ladies of the church for the afternoon tea, and the members of this church which has been part of our family life on and off for three generations.

On behalf of the family I want to thank you all for coming and taking part in our ceremonies today.