Earlier in Sri Lanka I had seen how it might be possible for World Vision to work in such a way that our development processes took the whole complex world into account. Not a piecemeal approach of bits and pieces, but a comprehensive process that honoured the wisdom and ability of the local people. With some colleagues, I began to talk these ideas up. One World Vision office which responded with enthusiasm was Guatemala and its director, Dr Annette de Fortin. In my heart, new hope began to emerge that World Vision's work would be increasingly effective and empowering of people.

My head ached. The altimeter in the Toyota Land Cruiser said 3,000 metres. Higher than Kosciusko. Up here it took at least two days to acclimatise. Any kind of activity left me breathless.

Geoff Renner, my World Vision colleague from Melbourne, adopted a typically Australian it-could-be-worse attitude. "You should be on the highlands of Bolivia at 5,000 metres," he said.

No, I shouldn't. I should be home in Melbourne. Mount Dandenong is plenty high enough for me.

In less than an hour we had climbed more than a thousand metres. From the top, the Mirador, we looked back to the town of Huehuetenango. You pronounce this Way-way-to-nango (rhymes with mango). I amused our hosts by suggesting most Australians would pronounce it Hewey-Hewey-to-nango.

Children in their colourful Indian clothes ran up as we got out of the cars and gave us yellow wild flowers. We gave them a few coins.

The view was spectacular beyond words. Many families live and work these steep slopes. They have virtually no money, but they do have million dollar views. Unfortunately, you can't eat a panorama.

The Business Of Empowering People To Transform Their Worlds

Over dinner the night before we had discussed our vision for ministry. Sitting around the table were Annette de Fortin, the World Vision field director, Javier and Hugo, two of her senior managers, Mario, the local area manager, Corinna Villacorta, a Peruvian colleague now working in Guatemala who had come along partly as my interpreter, Julio and Liszet, the local facilitators, and the visitors, Geoff and me.

I said we wanted to be in the business of empowering people to transform their worlds. (We had a bit of trouble translating empowering into Spanish, but between Geoff and the rest we worked it out to their satisfaction.) Empowering people meant doing the best development ministry we could. I said we wanted people in the field to say what was needed to transform the lives of the poor. Then let us think together about how we could create a relationship between the people in the project communities and our supporters.

At first I think our colleagues were sceptical that we really wanted them to have a blank sheet to work on. ‘Will your donors accept this?' asked Mario.

‘That's part of our challenge,' I replied, ‘we haven't found the donors yet. We are now making some undesignated funds available so you can get started. Then as we understand what you are doing better, we can begin to develop a strategy for communicating that to our supporters. I'd like you to help us in that too. And I'd like the community to know what we are doing in the support office.'

The hotel owner came over to tell us she wanted to close the restaurant. We went to bed. I heard later that everyone else sat up late discussing our suggestions.

Next day we headed up the mountains. We talked as we bumped and slithered along the poor roads. Gradually trust began to emerge. 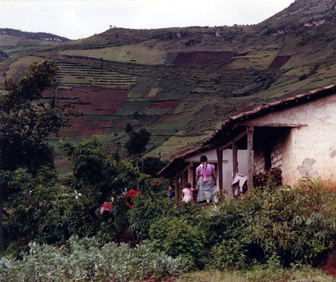 top of the mountain we came upon a high plain. At the end of the road was a small township, La Haciendita. When we arrived a dozen men surrounded the vehicles and welcomed us gladly. They knew Julio and Liszet.

They were open and confident. There was much to do here.

There was a lot of poverty. They knew they had the opportunity to help themselves. They welcomed our involvement with them.

What was different about this project? It was the way World Vision had decided to work — in the attitude, the approach. Julio and Liszet themselves came with an open agenda. Their first task was simply to get to know the community and to let the people get to know them.

Too often aid agencies arrive with a kit-bag full of solutions. Experience had shown us that this was actually high risk. First, no matter how good an idea, if people don't own it themselves there is a good chance it will fail. Just look at all the abandoned and useless tractors and water pumps scattered around the Third World by well-meaning but foolish donors. Second, people often know the solutions to their own problems. What they need is the opportunity or the process to spell them out, or sometimes to discover the wisdom that is within them.

World Vision's approach here was to spend time to become part of the community. At the time of our visit the project was actually a bit hard to see. It was invisible. That was because it existed in relationships.

Soon these relationships would begin to be productive for the local community as Julio and Liszet used their training as community development workers to help the community explore and discover solutions to their own problems.

Annette mentioned one difficulty in the area. For three months of the year whole families migrated to the coast to become coffee pickers. They earned about A$5 per person per day. Then they returned to the high country and tried to survive the rest of the year.

Some leading people in the community had contracts with the coffee plantation owners to provide workers. There was a complex system of exploitation.

Back on the high country they cultivated few crops. It was just too cold most of the year. They cultivated potatoes and ran sheep, but the lack and non-variety of food meant many children were malnourished. And staying warm in this part of the world was not easy either.

Down the road was another area called La Capellania The houses were spread out here and we walked across some fields to one of them. A twenty-six year old man and his twenty-five year old wife lived in this one room home with their two children, a girl aged three and a boy aged one. All they had were a few bits of furniture, a pallet for sleeping on, some blankets, and some pots and pans. A chicken wandered in and out. The children looked like they had not been washed in weeks. 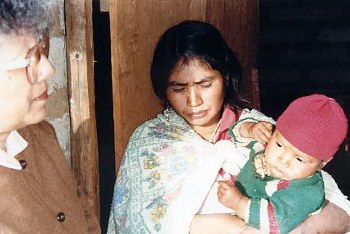 Annette, who was a medical doctor, discovered that the baby had a tumour of the umbilical cord. He needed to go to hospital, but the family had no money for the bus. A child might die for the lack of a bus fare, I realised. I asked whether we could help, and Geoff assured me it had already been taken care of during our conversation. Liszet was going to see to it.

Within a minute of our arrival seven men appeared as if from nowhere — the local committee. ‘It's unusual for two cars to come together,' said Annette, ‘so they knew something important must be happening. Then they saw Liszet in the car and realised it must be people from head office.'

Annette made a fine speech encouraging the people to take responsibility for their own futures. They responded enthusiastically.

‘It is we who will benefit, so we will try very hard,' said the committee chairman.

‘And we will help too,' said Annette.

‘Thank you very much,' they said to all of us.

This was our latest field program. I felt we could not be working with a better equipped national team. Annette and her colleagues were at the forefront of development ministry. They had introduced child sponsorship into communities, not as a way of getting money into communities, but as a way of linking communities with supporters relationally. They had taken this step even before most support offices were ready to respond adequately.

It was an exciting week for me in Guatemala. I felt I had seen the future of World Vision's development ministry.