2 - The Road To The Airport

Radio And Before Radio

I had come to World Vision from radio. I was a disk jockey. The station I worked for, 4BK Brisbane, was on the third floor of Newspaper House, Queen Street, Brisbane. In the heart of the city.

Today, only the facade of the building remains. A huge arcade has been built behind the preserved faces.

The same can be said of 4BK. Owned by Queensland Newspapers, the publishers of The Courier-Mail, Queensland's most popular newspaper, it was sold and converted to FM. No traces of my old haunts remain.

I left school at the end of 1966. My first job was with the National Bank. I started on my birthday, 16 January 1967. I was nineteen, having sat the Senior examination twice owing to lack of diligence. 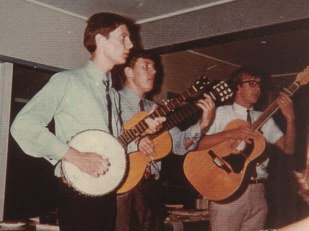 My trouble as a student was that I was interested in too much else. I was organising and playing piano at Methodist youth rallies. I was involved in youth camps. I was compering at church discos and coffee shops. With two other guys, Ron Goward and Paul Mills, I sang in a folk group called ‘The New Road Trio'. We tried to sing like the Kingston Trio and compensated for lack of musical ability with pure enthusiasm.

From childhood I had been interested in radio, playing with my Dad's AWA Magictape tape recorder. I recorded John Laws and Bob Rogers and could imitate their contrasting styles in my early teens.

George Lovejoy, best known as a flamboyant football commentator, was manager of 4BH in Brisbane in 1967. He knew me casually from my involvement in Temperance League shows that he had organised. I called him and asked about getting into radio. Within a few weeks I had an ‘audition tape' in my hand, produced with the skill of the 4BH audio engineer. It purported to show I had not only radio talent but experience.

Pat Maher, at 4NA Nambour, was not fooled by the production values, but he knew enthusiasm when he heard it. On 22 April 1968, my future wife's birthday, I started working in radio on the Sunshine Coast.

Later that year Judy Beeston and I were married and in 1969 we moved to Cairns, where I worked at 4CA and she worked for a local firm of solicitors. We found a substitute family at the Cairns Methodist Church, where we led in the Sunday school with the older youth and formed enduring friendships with some families.

In late 1970 we returned to Brisbane and settled in Ferny Hills. Jamie and Melanie came along in the early ‘70s, and I became settled in the afternoon shift, playing modern country music. I decided to go back to university and study journalism, and I found that I had matured as a student. By 1976 I had completed an Arts degree and a year's post-graduate work in screenplay writing. By that time I was working my radio shift, doing voice-overs at Channel Seven, and tutoring journalism students.

One day I saw an advertisement in the Positions Vacant pages of B&T, the trade weekly. World Vision (I had never heard of them) wanted a ‘Communicator'. The position was for someone with a grab-bag of communications skills and experience -- someone who could write for all media, who could take photos, who knew television, radio and print media, who knew music and art -- the creative side of the media as well as the production side.

It had never occurred to me that my background was genuinely useful to someone. I had felt that being a jack of all trades and master of none was a disadvantage. There was always someone who was better than me in anything. But there were few who could turn their hands to so much.

A little disenchanted by recent changes at the radio station which had moved me into the (admittedly more prestigious) drive-time shift, I applied. World Vision flew me from Brisbane to Melbourne and I met the communications director, David Longe, and the executive director, Harold Henderson.

I was impressed. They were business-like and professional. And they were Christians. Sadly, the combination was, and is, rare. Too much that passed for Christian work lacked the discipline of good management. Not so at World Vision.

Admittedly, I had learned the value of good management in the church itself Lew Born, the most significant mentor figure in my life after my own parents, had taught this to me (and many others). Lew was head of the Methodist Department of Christian Education. He was dynamic, creative and organised. More than that, he knew how to empower others. He took the enthusiasm and raw talent of young people and let them loose. It was high risk leadership that invariably paid off. 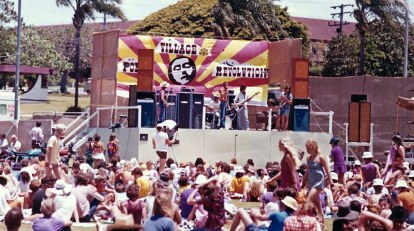 Under Lew's leadership, a series of Gold Coast New Year discos became an annual Pop Festival. One year it was televised live and pop groups from all around the country were flown in to perform. I compered. Similarly, camps for secondary school students were held. Lasting a week, they would attract more than 500 campers. The whole organisation was handled by a tiny group of paid staff and a huge group of volunteers, who committed themselves to pre-camp training, daily in-camp evaluation and post-camp de-briefings.

At World Vision, I found this same commitment to taking the job seriously. I flew back to Brisbane and told Judy that I wanted the job. David Longe must have posted the letter the next day. We were in Melbourne in time to see Hawthorn win the premiership, which began another love.

The India trip described in the previous chapter came a year later.

Soon, I was travelling once or twice a year for World Vision. Mostly my task was to go with a photographer to get stories and pictures about what World Vision was doing. One series of trips to Korea was to organise a visit to Australia of the Korean Children's Choir. Three times I produced documentaries, in Uganda, in Somalia and with the Vietnamese boat people in Thailand. In the two latter cases, programs were produced that were shown on national television. Anne Deveson was the reporter for all three visits.

In 1978, David Longe went to the United Kingdom to work for World Vision there. I was invited to become communications director.

Four years later, the whole family was in Hong Kong where I had been appointed executive director of World Vision of Hong Kong.

World Vision had been providing assistance there since the early 1960s, but by 1982 the colonial government was taking its social welfare responsibilities more seriously and the need for World Vision had diminished. Simultaneously, however, the Hong Kong community was becoming richer and many people wanted to share their wealth. A local Christian magazine, Breakthrough, ran a story about World Vision and almost a thousand people became child sponsors. I was despatched to Hong Kong to set up an office to build on this wave of support.

After establishing a foundation that local people could build on, I moved back to World Vision Australia in mid-1985. I was appointed director of planning and later director of donor services. In 1988, Harold Henderson moved to Geneva with World Vision International and on 1 January 1989 I took over as chief executive.

So, What’s This Book All About?

It is not my intention to be autobiographical. I'm not old enough, nor significant enough, to warrant a biography. Rather, I want to show how I have journeyed towards justice. Much of that journey has been the consequence of the cross-cultural encounters I have had with the poor and the oppressed. In other words, as I have travelled with World Vision, I have grown in insight, understanding and compassion.

There are other factors too, of course. It seems cruelly unfair to merely mention in passing the impact of people like Harold Henderson. He was my boss, friend, mentor, father-figure and confidant for almost a decade. He shaped World Vision Australia so effectively that, when I took over, I made no significant changes. Of course, time makes ancient good uncouth, so there have been many changes since. Yet all have been built on the strong foundations Harold laid. These included foundations of structure and knowledge. He taught us a great deal. Some of it we only discovered years later. So that's what Harold meant! has been a common experience of my leadership.

But my main purpose is to bring you on my travels with me. As I have travelled in a physical sense to scores of places around the world, I have been on an ethical and philosophical journey as well. Travel has reshaped the way I think and experience the world -- it has literally transformed me. It is both the inner and outer journey I want to try to share in these pages. In the beginning there is much innocence and naivete. Towards the end (the end of this book, not of my journeying) I have discovered much about justice and compassion in myself and in my own country.

next chapter - "discovering the world"